Home » Health » Gut Health » How to Fix SIBO for good! (+ why antibiotics and SIBO diets fail)

How to Fix SIBO for good! (+ why antibiotics and SIBO diets fail)

Home » Health » Gut Health » How to Fix SIBO for good! (+ why antibiotics and SIBO diets fail) 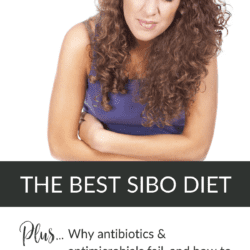 What is SIBO, how to know if you have it, and how do you fix it for good? We cover all the latest research and recommendations for testing, popular SIBO diets, antibiotics vs. supplements, and more! 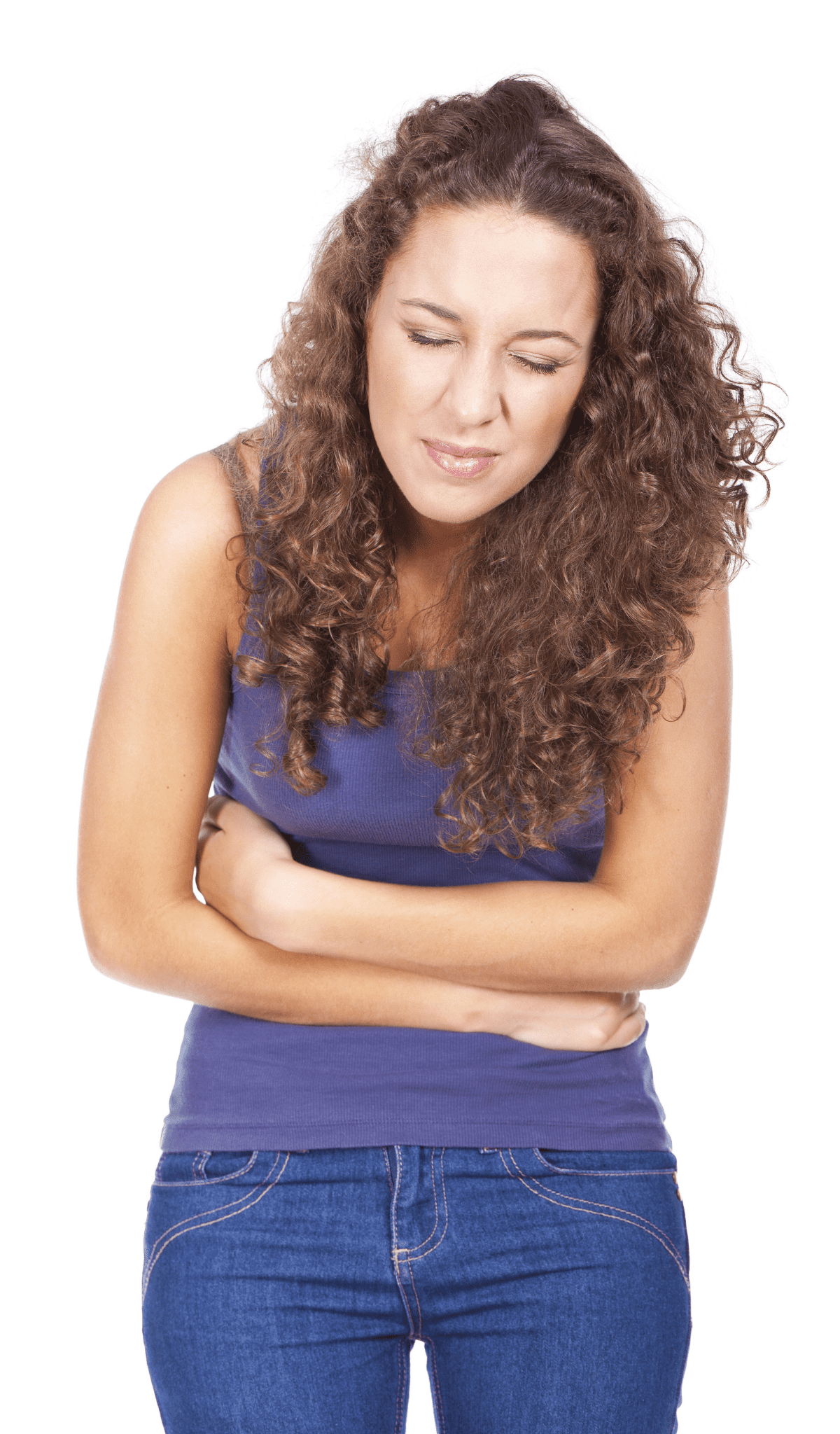 Note from Dena: I’m excited to share this guest post on such an important topic. It was co-written by Marla Ramos, Dietetic Intern, as part of a research partnership between Back To The Book Nutrition and post-graduate nutrition students from the University of Houston.

We all suffer from these from time to time, but if you’re one of many people who are experiencing one or more of these symptoms on a weekly – or even daily – basis, you may have SIBO. In fact, if you’ve been diagnosed with Irritable Bowel Syndrome (IBS), SIBO is even more likely (Source).

SIBO stands for Small Intestinal Bacterial Overgrowth, and has traditionally been thought to occur when either too many or the wrong type of bacteria multiply in the small intestine. I believe this overemphasis on the overgrowths in SIBO is why the traditional approach of repetitive rounds of antibiotics (or herbal antimicrobials) fail.

The root causes of SIBO are still being understood, but it seems as though risk factors are similar to those for other gut disorders.

This may not sound like a big deal. But it can wreak havoc on the GI system and, if it isn’t treated, can lead to other health complications. 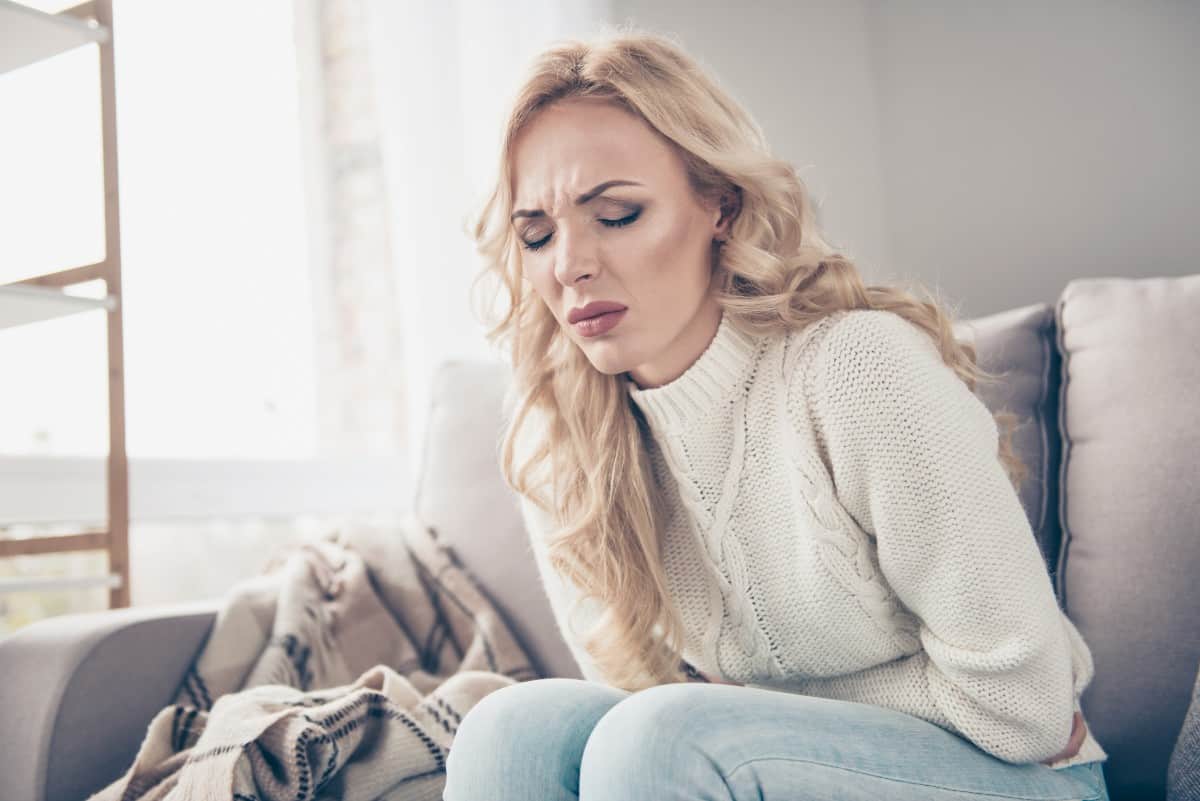 How Do I Know if I Have SIBO?

If you have any of the following symptoms and are not getting better with treatment or diet changes, you may have SIBO.

How to Test for SIBO

Currently, there is no perfect test for SIBO. Scientists are hard at work exploring more accurate testing methods, but these are the most common currently:

Note: This post contains affiliate links. By making purchases through these links, you pay the same amount for products, but a small portion of the sale will be sent my way to help with blog expenses. Thanks! 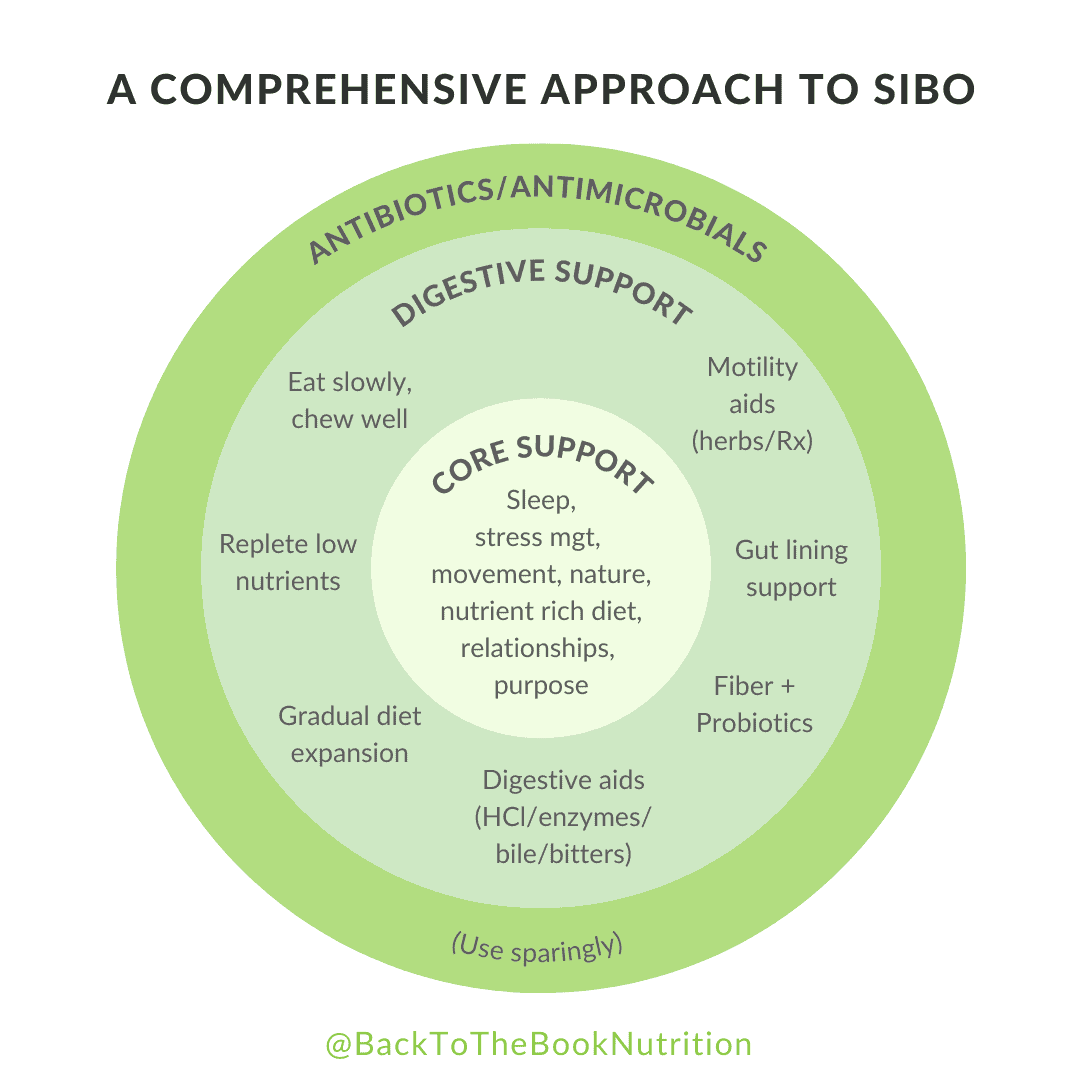 The most important thing to keep in mind is that SIBO isn’t just a single infection needing a single treatment. So just taking antibiotics and going back to living your life will not work in most cases.

SIBO is an imbalance that likely developed over months or years due to multiple factors. And, if you want lasting relief, you’ll need to devote several months to addressing all of the contributors in a holistic way using a combination of the diet, supplements, lifestyle, and medications outlined below.

Antibiotics, two in particular, have shown to have great results in the treatment of SIBO. These appear to be more effective in the small intestine, have less “collateral damage” in other parts of the gut, and to be less likely to promote antibiotic resistance like traditional antibiotics do.

Prokinetic agents (such as Metoclopramide) are often given alongside antibiotics to help move things through the gut more quickly and reduce risk of feeding the bacteria.

Killing may be needed, but I find it best to incorporate some or all of these to supporting overall digestive health. These can be used first or alongside antibiotics or herbal antimicrobials if needed.

If you prefer not to take prescription antibiotics, a recent study showed herbal antimicrobial therapies may work just as well, and usually with fewer side effects. Keep in mind that methane, hydrogen, or hydrogen sulfide dominance may alter which are most effective.

Prebiotics and Probiotics for SIBO:

Recent studies have shown that prebiotics and probiotics may be an effective alternative to antibiotics in treating SIBO or, at the very least, can improve outcomes when added to antibiotics. (Source) A 2018 meta-analysis evaluated 18 studies and concluded that probiotics didn’t help prevent SIBO but did effectively treat SIBO and significantly reduced symptoms. (Source)

My experience with clients has been mixed, so you may have to do some trial and error with various probiotic blends to determine whether they’re helpful for you. 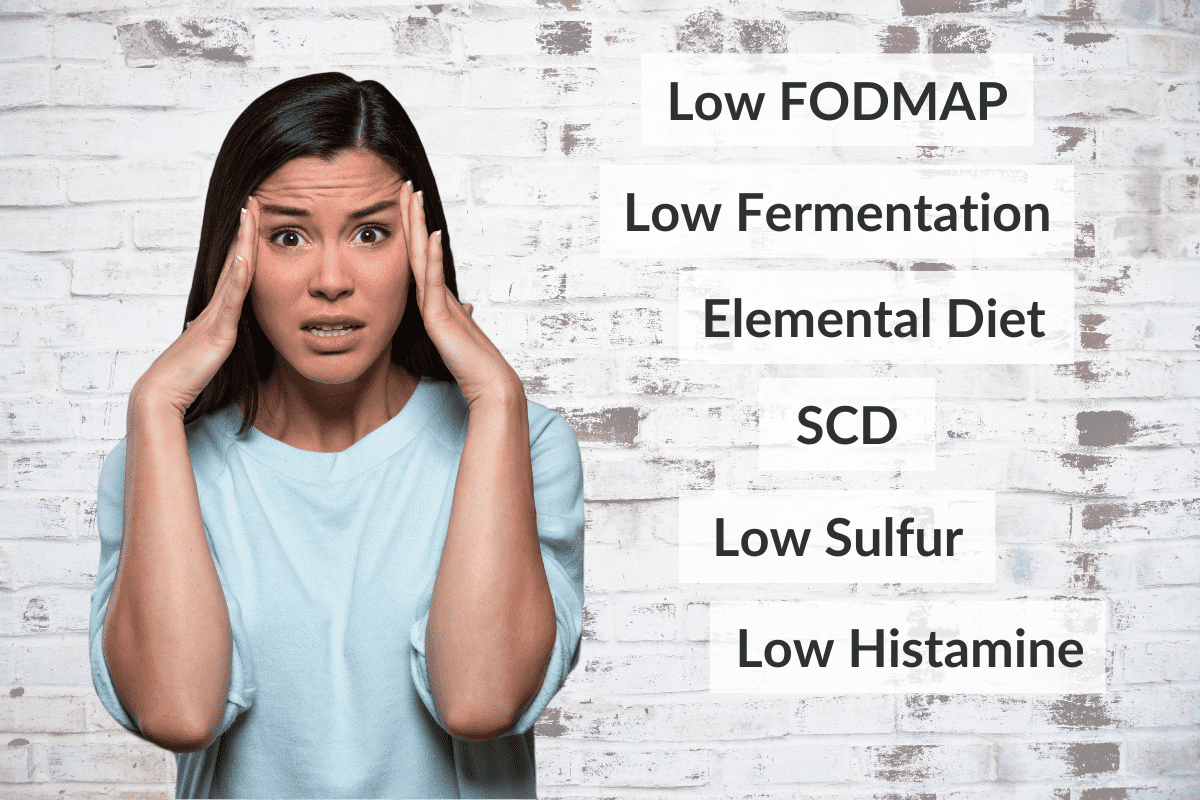 Several different diets recommended for SIBO are listed below. These can reduce symptoms for some, but no studies to date have shown that a diet can resolve overgrowth/dysbiosis. Basically, they can help you feel better but aren’t fixing the actual problem.

Restrictive diets are also difficult to maintain, can promote unhealthy food relationships, increase risk for nutrient deficiencies, and may even perpetuate gut imbalances that give rise to SIBO.  (Source)

It’s best to work with a registered dietitian to help determine whether a particular “SIBO diet” is best for you, and to help you with a personalized plan for gradual reintroductions as your symptoms improve. (Sources: 1, 2)

More info on each of these SIBO diets can be found here.

If you’ve already been through one or more rounds of the restrictive SIBO diets and antibiotics/antimicrobials above, you may gain more benefit from improving digestive juices and motility, while gradually expanding your diet to include more variety again.  This can be a slow and frustrating process, and having a professional to guide you can help immensely.

Will My SIBO Come Back?

Unfortunately, our understanding of SIBO and how to effectively treat it is still evolving. Even with effective treatment, SIBO has a recurrence rate of 44%. (Source) Again, I believe this dismal statistic has a lot to do with the fact that killing overgrowths has been the almost exclusive approach to SIBO until more recently.

To reduce the risk of recurrence, it’s important to use antibiotics and antimicrobials judiciously, to use SIBO specific antibiotics when needed,  address the more global gut dysfunctions listed above, and to eat a plant rich diet that feeds a diverse microbiome.

Get Help with SIBO Today!

About the co-author: Marla Ramos is a Dietetic Intern, with a B.S. in Human Nutrition and Foods from the University of Houston. She has a particular interest in gut health due to her own personal experience with Crohn’s Disease.

I never knew any of this and have never heard of SIBO! This was extremely informative and super helpful!

Hihi….am I the only one here that wishes doctors explained loose stool or diarrhoea this easily? You have clearly schooled me!

I’m glad it was helpful, Ntensibe!

I never heard of this before, and thanks for sharing this info. I’m not sure if I have SIBO but best to check and know my diet.

This is the first time I heard about SIBO. It stands for Small Intestinal Bacterial Overgrowth. Wow! I learned a lot from this article.

I think I’ve heard a friend mention this and it’s great that I get to know more about it through this post. Those are some great points to keep in mind.

This is the first time I’ve heard of SIBO before and I learned tons of new things in this article. Will keep this in mind.

Wow wow wow, such an in-depth article. I love it. I will save it for spring when I’ll start my diet again.

If I had never discovered this post, I do not think I would have ever learnt about SIBO. Thank you for creating this comprehensive medical guide. I have rated it 5/5.

I hadn’t heard of SIBO before. Great to know all this information now in case I ever have the symptoms or know someone that has it.

Woooow, I had no idea about this at all. This is such an informative blog post. I thank you you teaching me something new and important.

I am glad that you found it useful Farah. Thanks for commenting! 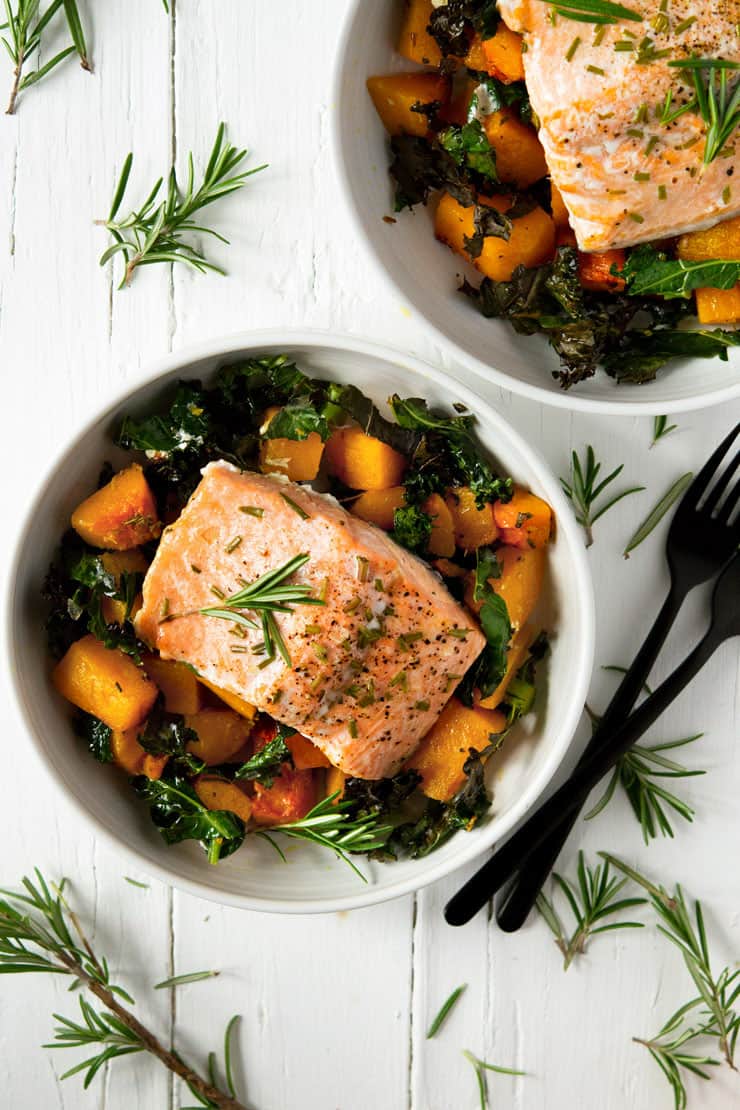