What is SIBO, how do you get tested, and how do you treat it? What’s the best diet for SIBO? Get answers to all these and more, plus how to book an appointment for one on one help from a registered dietitian. 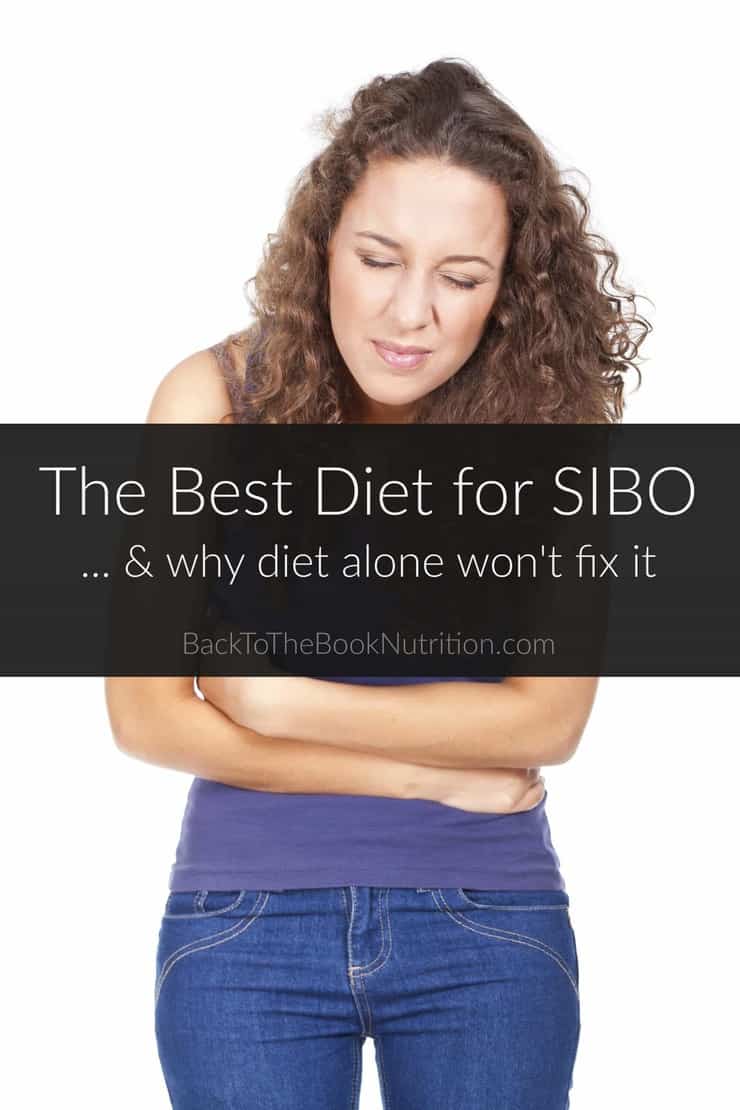 Note from Dena: I’m excited to share this guest post on such an important topic. It was written by Marla Ramos, Dietetic Intern, as part of a new research partnership between Back To The Book Nutrition and post-graduate nutrition students from the University of Houston.

We all suffer from these from time to time, but if you’re one of many people who are experiencing one or more of these symptoms on a weekly – or even daily – basis, you may have SIBO. In fact, if you’ve been diagnosed with Irritable Bowel Syndrome (IBS), you’re almost guaranteed to have SIBO (Source).

The root causes of SIBO are still being understood, but it seems as though risk factors are similar to those for other gut disorders.

These factors can lead to an overgrowth of bacteria in the small intestine in one of two ways:

This may not sound like a big deal. But it can wreak havoc on the GI system and, if it isn’t treated, can lead to other health complications.

How Do I Know if I Have SIBO?

If you have any of the following symptoms and are not getting better with treatment or diet changes, consider testing for SIBO.

How to Test for SIBO

Currently, there is no perfect test for SIBO. Scientists are hard at work exploring new methods of testing, but these are the most common currently:

Get tested for SIBO – Schedule a free call to learn more!

Note: This post contains affiliate links. By making purchases through these links, you pay the same amount for products, but a small portion of the sale will be sent my way to help with blog expenses. Thanks!

There are a few different approaches to addressing SIBO, and the latest research indicates that a combination of medical + nutritional therapies are most effective.

But here’s where it gets interesting.

According to Dr. Mark Pimentel, MD, Director of the Gut Motility Program at Cedar-Sinai Medical Center and leading expert in SIBO, well-fed bacteria are easier to kill with antibiotics (both conventional and natural) than those that have first undergone a period of diet changes.

Because of this, some experts recommended basic diet changes (reducing sugars, refined grains, and dairy) rather than overly restrictive diets that were previously recommended for SIBO. The entire process of medical + nutritional therapy can take 6-12 months. (Source) It’s important to consult with qualified providers about which of the following medical treatments and dietary approaches might be best for you.

Antibiotics, two in particular, have shown to have great results in the treatment of SIBO.

Prokinetic agents (such as Metoclopramide) are often given alongside antibiotics to help move things through the gut more quickly and reduce risk of feeding the bacteria.

If you prefer not to take prescription antibiotics, a recent study showed herbal therapies may work just as well, and usually with fewer side effects.

Prebiotics and Probiotics for SIBO:

Recent studies have shown that prebiotics and probiotics may be an effective alternative to antibiotics in treating SIBO or, at the very least, can improve outcomes when added to antibiotics. (Source) Download your free Ultimate Guide to Probiotic Supplements here!

Functional neurologist Dr. Datis Kharrazian suggests that many individuals with SIBO have a problem with their brain-to-gut connection, which allows the overgrowth to occur in the first place. He maintains that many of his patients with SIBO benefit from simple, at home therapies (such as aggressive gargling, inducing a gag reflex, etc.) that can be done several times daily to re-train the brain-to-gut connection. These therapies essentially repair the motility problem for which conventional doctors might prescribe prokinetics.

Here is an excellent interview with Dr. Kharrazian in which he discusses a number of gut-brain issues. The entire hour-long interview is fascinating but, if you want to skip straight to the at home therapies and discussion of SIBO, they’re around minute 12 and 18, respectively.

There are several different diets recommended for the treatment of SIBO. Each of these uses similar principles and show success relieving symptoms. But, such restrictive diets can be difficult to maintain, unlikely to permanently resolve SIBO, and – as mentioned above – may do more harm than good in the long run. It’s best to work with a registered dietitian to help determine whether a particular “SIBO diet” is best for you, and to help you make personalized adjustments along the way for the best results. (Sources: 1, 2)

More info on each of these SIBO diets can be found here.

Will My SIBO Come Back?

Unfortunately, our understanding of SIBO and how to effectively treat it is still evolving. Even with effective treatment, SIBO has a recurrence rate of 44%. (Source)

To reduce the risk of recurrence, it’s important to also treat the underlying causes listed above, such as inflammation, poor immune function, insufficient stomach acid, and dysmotility.

Get Help with SIBO Today! 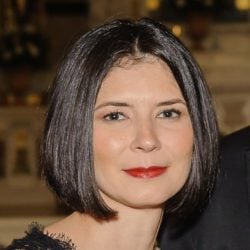 About the author: Marla Ramos is a Dietetic Intern, with a B.S. in Human Nutrition and Foods from the University of Houston. She has a particular interest in gut health due to her own personal experience with Crohn’s Disease.

This is the first time I heard about SIBO. It stands for Small Intestinal Bacterial Overgrowth. Wow! I learned a lot from this article.

I think I’ve heard a friend mention this and it’s great that I get to know more about it through this post. Those are some great points to keep in mind.

This is the first time I’ve heard of SIBO before and I learned tons of new things in this article. Will keep this in mind.

Wow wow wow, such an in-depth article. I love it. I will save it for spring when I’ll start my diet again.

If I had never discovered this post, I do not think I would have ever learnt about SIBO. Thank you for creating this comprehensive medical guide. I have rated it 5/5.

I hadn’t heard of SIBO before. Great to know all this information now in case I ever have the symptoms or know someone that has it.

Woooow, I had no idea about this at all. This is such an informative blog post. I thank you you teaching me something new and important.

I am glad that you found it useful Farah. Thanks for commenting!

This article really provides a lot of good information on SIBO. I didn’t know much about it before I read this post.

This was a very informative read. Im slightly a hypocondriac so i did not read the symptoms lol. But this educated me about the existence of this condition.

I’ve never heard of SIBO before. I may mention this to my doctor when I go in for my next check up. 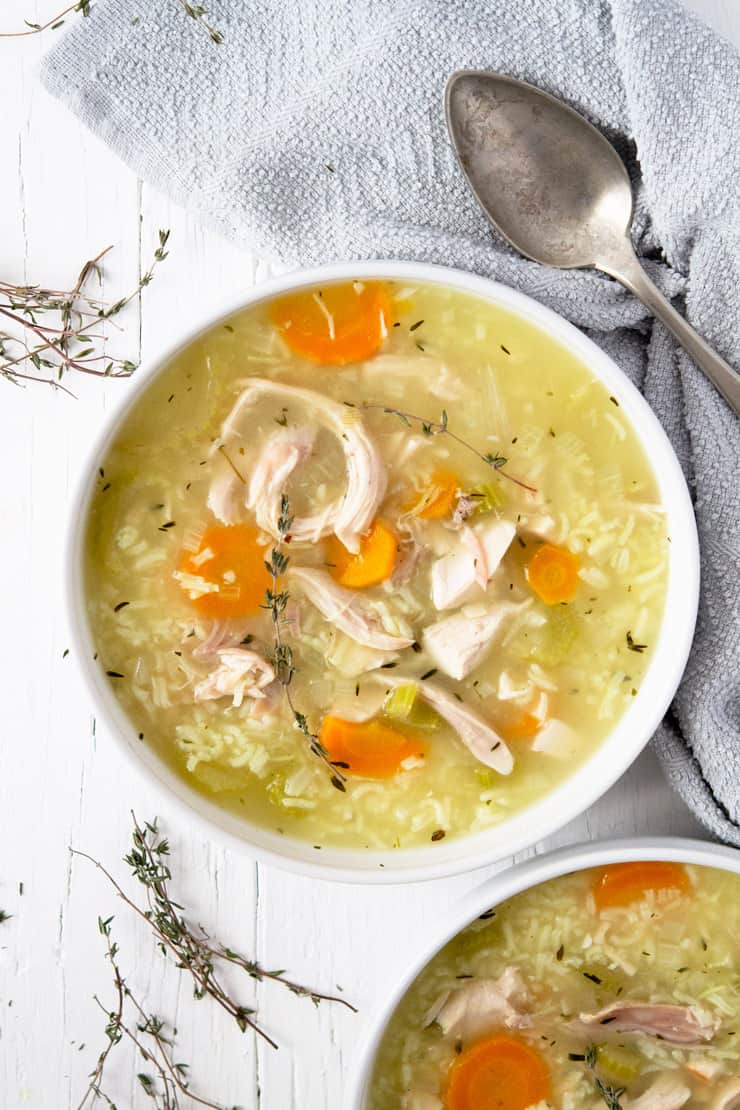